In the last post I gave a simple example of how to discern the voices in our head (God, Satan, or the Flesh). In this post I will elaborate more on the Flesh, which is probably where the greatest confusion remains in most Christian circles. First, the following is a simple way to define the voices:

The Flesh: Learned behavior/habits, coping mechanisms, our own subjective thoughts (i.e. “I want to eat at Burger King today).

You would be hard-pressed to walk into any church today and hear a message teaching these concepts, which is dreadfully sad. Most Christians walk around with somewhat of a self-defeatist attitude. “I’m just a wretched sinner!” True, we are sinners saved by grace (Eph. 2:8-9), but once we have been saved we are a new creation (2 Cor. 5:17, Gal. 6:15, Eph. 4:24, Col. 3:10) clothed with the righteousness of Christ (Who I Am in Christ). We are no longer wretched sinners, but rather, children of God who still sin. 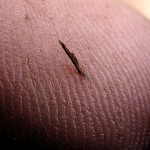 Neil Anderson uses an excellent illustration of this concept (from the book The Bondage Breaker). When you get a splinter in your finger, do you say you are a wretched piece of wood because you now have a splinter in your finger? Do you now take on the identity of the splinter as your own? Obviously not! No, you are a human being with a piece of wood in your finger. Scripturally you will find this concept made clear in Romans 7:14-25. It doesn’t take much work to discover that Paul is referring to himself after he has been regenerated (I know much debate remains about this fact, but if you’re using proper techniques of Biblical interpretation you can arrive at no other conclusion than this). Many of us can identify with Paul’s struggle. We know better, yet we still sin! What’s wrong with us?

In simple terms we are infected with the “sin splinter” otherwise known as “the flesh”. The nature we were born with (self-serving/pride) along with the habits we’ve developed over a lifetime all contribute to this voice known as the flesh. Paul recognized this and he hated it. He knew he had been regenerated as a new creation in Christ, yet at times he still struggled to put that old nature to death. We can only imagine what Paul’s specific struggle was with but Scripture isn’t clear on it. It wouldn’t surprise me if pride had something to do with it, though. Deep down we are all struggling against a self-serving attitude, from the way we dress to the food we eat. Our world revolves around us, our desires, wants, and needs. No matter how awesome we are as Christians, pride will always be an issue because it is in our flesh which continuously wars with the new life we received when we accepted Christ. Jesus is the antithesis of pride and self. This is why just doing “what Jesus would do” is not as easy as it sounds. It contradicts our flesh! On our own we can’t will ourselves into good works with proper motives; this can only be accomplished through Christ’s rule in our hearts.

As an addict I learned how to cope with mental anguish by abusing drugs. This was a learned behavior, as well as a sinful behavior. Over time it became a pattern of life. Feel pain—take drugs—pain goes away (temporarily). Some of us deal with unhealthy learned habits every day when we fight the urge to over-indulge at the dinner table or eat chocolate for dinner instead of broccoli (maybe even chocolate covered broccoli?). I grew up drinking soda and cool-aid every day, and eating macaroni and cheese and bologna sandwiches. It was a learned way of eating (and an early introduction to weight problems). As an adult I have had to work hard to re-learn a healthier way to treat my temple (1 Cor. 6:19-20). But when that voice kicks in saying, “Boy, I’d sure love to sit down with a bag of Doritos and watch T.V. all day,” I can be certain this voice is my flesh and not Satan.

•denial (a conscious or unconscious refusal to face the truth)

•displacement (taking out frustrations on others)

[Strongholds] are fleshly thought patterns that were programmed into your mind when you learned to live your life independently of God. Your worldview was shaped by the environment you were raised in. But when you became a Christian, nobody pressed the “CLEAR” button. Your old fleshly habit patterns of thought weren’t erased.¹

I hope this clears up some of the confusion surrounding the flesh and what exactly it means. In the next post we’ll discuss Satan’s voice in specific detail.

Are you able to recognize fleshly patterns in your own life? What is your greatest “flesh” struggle?

Spiritual Warfare 101: Is it Real?

Rebecca Aarup, author and freelance writer, is a redeemed prodigal, set free from over a decade of mental illness, eating disorders, addiction, and more. She now enjoys sharing her story of freedom and transformation, as well as teaching about spiritual warfare and the importance of understanding our identity in Christ.